General upper secondary school education is an option for students to apply to complete their studies from ages 16-19.  Students take a wide variety of classes that result in taking the matriculation exam and provide students with eligibility to continue to further their studies at the university or polytechnic level.

Students must apply to an individual school using their grade point average from grades 7-9.  General upper secondary schools often offer a specialized interest track that requires a higher GPA- such as music, language, sports, etc.  It is competitive to get into certain schools that have a known reputation for the higher GPA.  Although, there is no official ranking system in Finnish schools at the high school level there is certainly an informal knowledge base of which schools are “better” to attend.

Students often say that they have been given the advice to attend lukios if they don’t know what they want to do for a career.  The broad overview of the curriculum allows students to experience many different fields and provides them with exposure to many different topics before having to decide a career field.  Lukios are also seen as a direct path to universities and other higher education opportunities and so are often chosen if students want to continue their education without time in the workforce.

A School With No Grade Levels 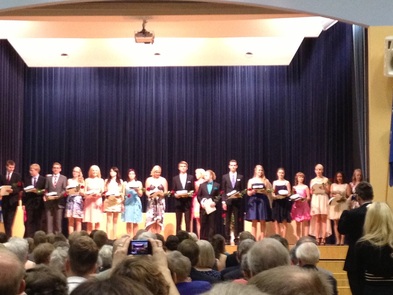 Students can take between 2 and 4 years to complete the requirements for high school graduation.  The average amount of time for a student to complete their studies is three years.  Students are empowered to create their own schedule with the guidance from a study counselor.  Students have their own login to a web based system that shows course offerings and teachers.  Through this process, students select the number of courses and what courses they would like to take during the 6-week study period.  Students can decide that they want to have heavier course loads during the first part of the year, spread out difficult classes or even work around extracurricular activities.  Students who have trouble getting to school on time can often take classes that start later in the day.  Students create their own individual study path based on their own reflections and self-knowledge.  The study counselor helps provide guidance and to make sure that all requirements are being met.

The freedom that students have to create their own schedule provides for an environment that is “gradeless” in the traditional sense.  Classes are often mixed with students in years 1, 2 and 3 of their studies.  This system allows a lot of freedom for students to finish high school in as much or as little time as they need.  It also contributes to creating culture of collaboration between students instead of being divided among grade levels.

The National Core Curriculum for Upper Secondary Schools was reformed in 2003 and the guiding principals are set at the national level by the Finnish National Board of Education.  The National Board only provides a general overview and broad objectives of the course.  It is up to the local schools to determine the specifics to the curriculum and how to meet the needs of the community.

The requirements to graduate from a lukio are listed below:
An example of the curriculum outlined by the National Board of Education for a 6 week class titled "International Relations" is as follows:

• Cold War theories: the United States and the Soviet Union as the superpowers in a bipolar world;
• the ideological, economic and military fronts of the Cold War;
• the nature of Cold War crises;
• Germany as a theatre of the Cold War;
• China’s role in international politics.

Although there are specific topics listed, it is a manageable amount to be covered throughout the 6-week course.  It is now the teachers responsibility (with very little oversight) to structure the course in a way that meets the standards. 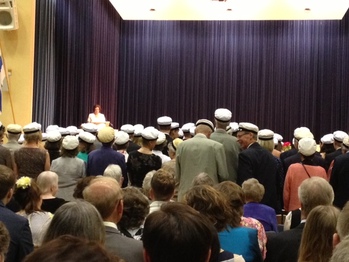 Newly capped students and graduates from 50 and 60 years ago
Students are required to take four matriculation exams at the end of their studies.  The exam in the student’s mother tongue is a requirement for all.  Students also must choose 3 tests from the following list of four subjects: second national language, foreign language, mathematics and in the sciences or humanities.  They are encouraged to study a wide range of topics over the course of their general upper secondary studies.  At graduation, students receive a white cap that symbolizes their completion of the matriculation exam.  Read here about Vappu, the national holiday where graduates wear their caps again.

Additional assessments are teacher created and must be based on objectives defined by the curriculum.  Students in Finland take tests, just not the standardized tests that evident in many other educational systems around the world.

After spending time in many different upper secondary schools all over Finland, it is clear that there are many things that make this environment a successful learning environment.

Relaxed atmosphere for students and teachers:  between classes, student take a 10-15 minute break depending on the school.  During this time they can hang out on comfy couches, chat with their friends, grab a snack or even check email online.  Teachers are not expected to monitor students closely during this time allowing them to grab a quick cup of coffee to meet briefly with a colleague.  These frequent breaks allow for a much more relaxed culture at school.

6-week study periods:  classes meet for 6 weeks and then switch to a new schedule for the next study period.  Although many teachers are frustrated with the fact that they hardly get to know their students before they are out the door again, students often talk about how these frequent changes keep them engaged in their classes.

Home Group Teacher: when students first enter into high school, they are assigned a home group with a teacher who will stick with them throughout the 3 or 4 years they are attending the school.  This provides stability and a personally connection with a staff member right away.

Independence of students:  students have a lot of choice and very few rules when it comes to school in Finland.  This independence keeps students engaged and motivated in their studies.  This can been seen specifically in general upper secondary schools and the control students have over their schedules.

Warm, good, food: it would be wrong to ignore the fact that students in Finland (not just in lukios) get to sit down and enjoy a warm, cooked meal in the middle of their day.  This helps with the atmosphere and with allowing students a safe and healthy environment to spend the day learning in.