I used three different methods to collect data- survey, observations and interviews.  I never set out in this process to produce “numbers” as I have always been more interested in people’s perspectives and insights into the teaching profession and into the Finnish system.  However, I do think it is interesting to look at a sample population and try to understand a few things in little more of a qualitative method. 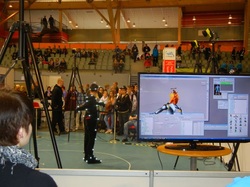 The observation form was developed from several conversations with US educators about what a good observation would look for and how you would capture that data on a form.  I really wanted to capture methods of teaching critical thinking, teacher vs. student talk time and literacy (both reading and writing skills).  This is the observation form that I used.

Download File
It became clear pretty quickly, that my limited knowledge of Finnish was getting in the way of understanding the type of questions that students were asking.  I limited the observations that I recorded data for to classes that were taught in English.  I observed many more classes that I used this form to record my observations on, but felt like these 17 observations were a good sample of the teaching that I was seeing throughout Finland.

It also became very clear that direct instruction does not happen in vocational classes.  The foundational philosophy for vocational education is performance-based so students spend the entire class working on the skill they are learning with one-on-one teacher support.  The observations that I completed using this form were from the general studies classes that students take in addition to their skills classes.  It is clear that these classes are geared toward the career that students are studying.  For example, in an English class that was for students studying Safety and Security, they were working on vocabulary lists in English that you would encounter as a customs agent and scenarios that would happen in a bank.  I still found that the majority of the time in the vocational classes the lesson was focused on student-centered activities.

It was significantly easier to get into lukio (high school) classrooms than ammattikoulu (vocational schools) because of the schedules.  Classes change every six weeks and vocational students have many on-the-job working periods where they are not meeting in a traditional classroom setting.  This caused my observation data to be collected mostly from lukio classrooms and allowing me to draw more conclusions about the high school setting.  I was often asked to speak in a class about my experience in US schools and answer student questions that interrupted regularly planned classroom instruction.

Here are some of the trends that I discovered from the observations about lukios:

In many classes teachers are still heavily dependent on textbooks for direct instruction.  The writing and research about school reform suggests that student-centered methods are being taught in university.


Students are given a lot of freedom to make their own choices.  This means that there are very few rules at school.  Students can have their cell phone out, there are no consequences for being tardy, and there are very few actions that merit a formal discipline action.  However, Finnish teachers spend a lot of time redirecting students toward more appropriate behaviors.

I was invited into a grade 9 career counseling class in February.  This is around the time where students start to research and make their decision about what school to apply to for upper secondary school.  I had just visited the Next Step School fair and was excited to talk with students about what they were thinking about.  There were 7 boys and 5 girls in the first class and 8 boys and 9 girls in the second class.  It quickly became apparent they were pretty shy to talk to a native English speaker and I think that probably influenced their answers to my questions.  With help from their study counselor, I learned the following:


I asked these groups what was more important when considering what job you wanted to do, money or interest in career?


In the wise words of a 14 year old, “money is important, but interest is more important because you do a better job if you like what you do.”

After this class, I realized that I would get more accurate responses if I initially gave a survey in Finnish and then talked with students about their answers.  I created this survey and had my university advisor translate it (both versions are in the attachment).

Download File
Over the course of three months I gave this survey to 73 students in Helsinki, Jyväskylä and Muureme.  The students in the Double Diploma program are in different vocational study programs and are also taking the high school studies to take the matriculation exam and receive a high school diploma plus vocational qualification upon graduation.

Here is the breakdown of some of the results.

Finnish students are a blast to talk to!  Since they don’t know anything different than the current system, they think it is a little crazy that I have flown all the way to Finland to learn about something that isn’t a big deal to them.  But they humored me and answer a bunch of different questions (shout out to Iiris Sydänmaanlakka who sat through countless “what if” scenarios for me to understand Finnish teenagers better!) just so I could get a better understanding of this very normal system.

Some things I found interesting-

Finland’s educational system is structured to have each student come to a full realization of their potential and explore their individual interests.  The value that is placed on education means that less than 9% of the population (Statistics Finland, 2011) drop out of school between compulsory education (grades 1-9) and voluntary upper secondary school (3 years).  However, research shows that Finnish students are not interested in school.

o   How do students who clearly value education also become more engaged and interested in school?

Finland does an amazing job of supporting their students who are struggling in their individual learning paths to create an equal playing field for all students.  However, those students that are gifted do not get the same supports to push themselves further than that equal playing field.

o   How can students be encouraged to go beyond the norm and push themselves in the areas of innovation and entrepreneurship?